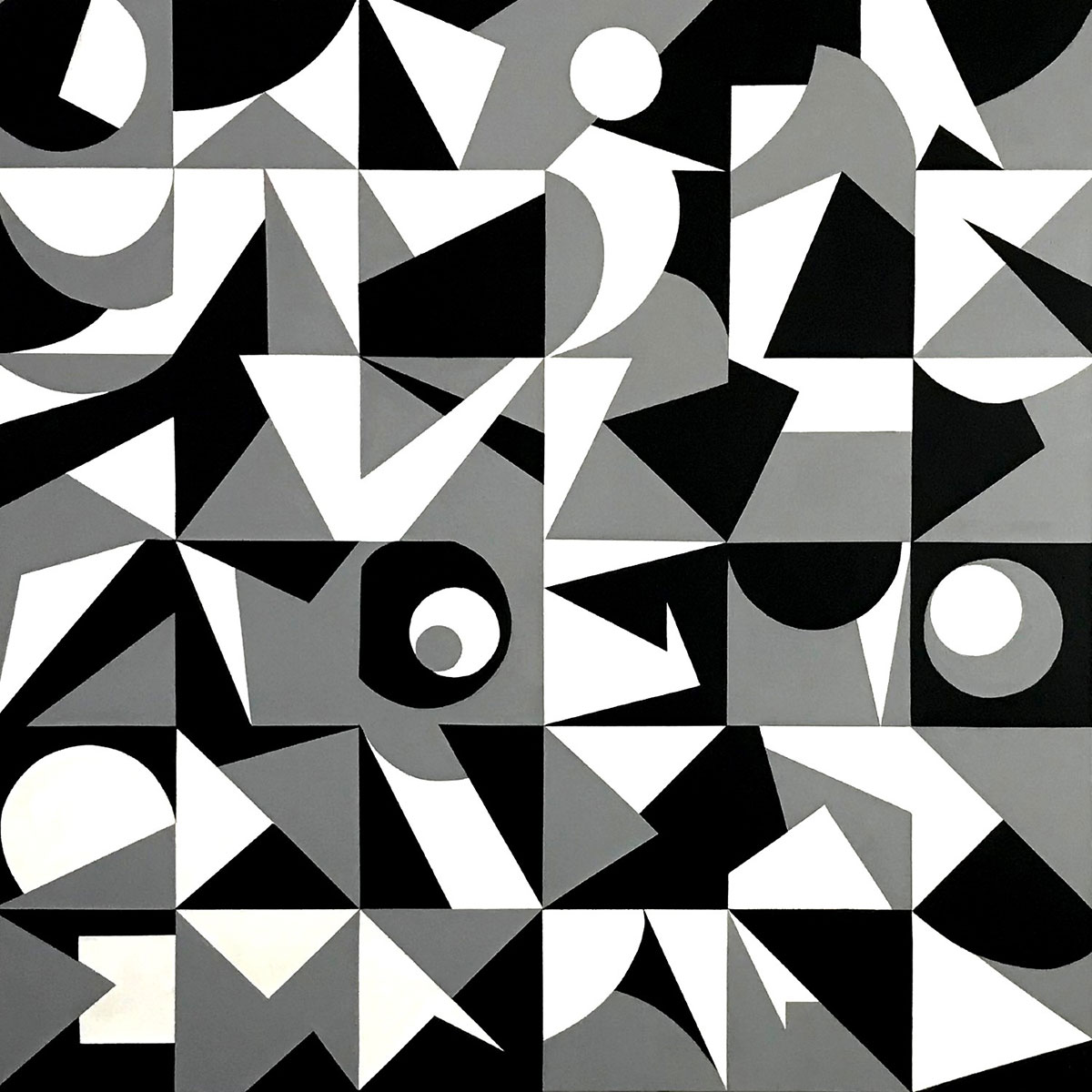 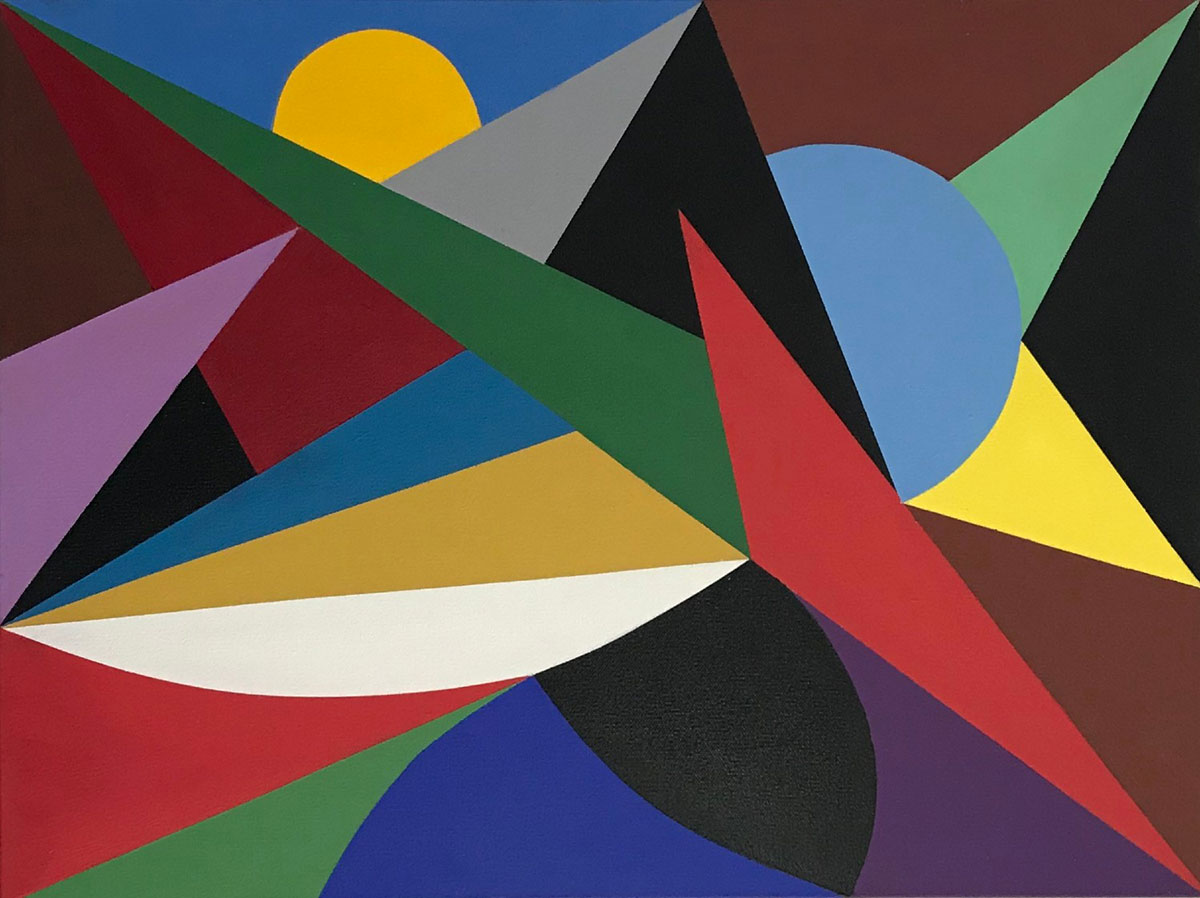 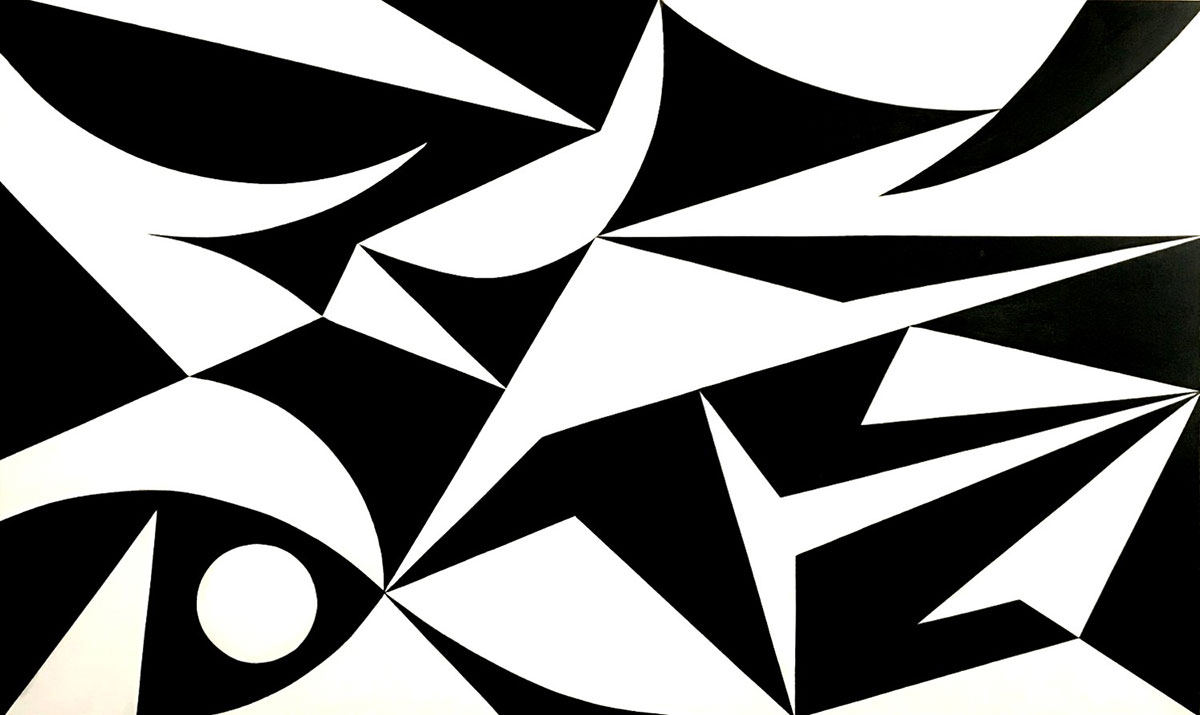 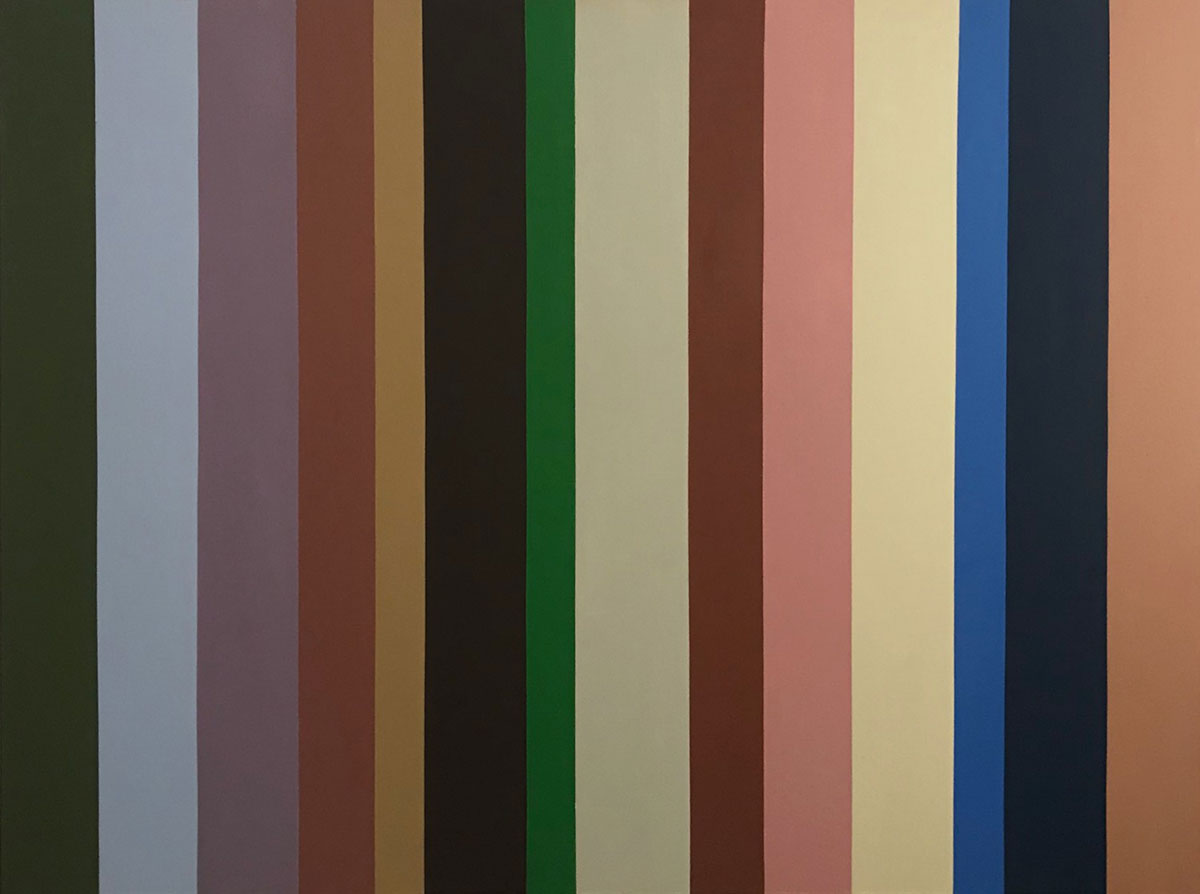 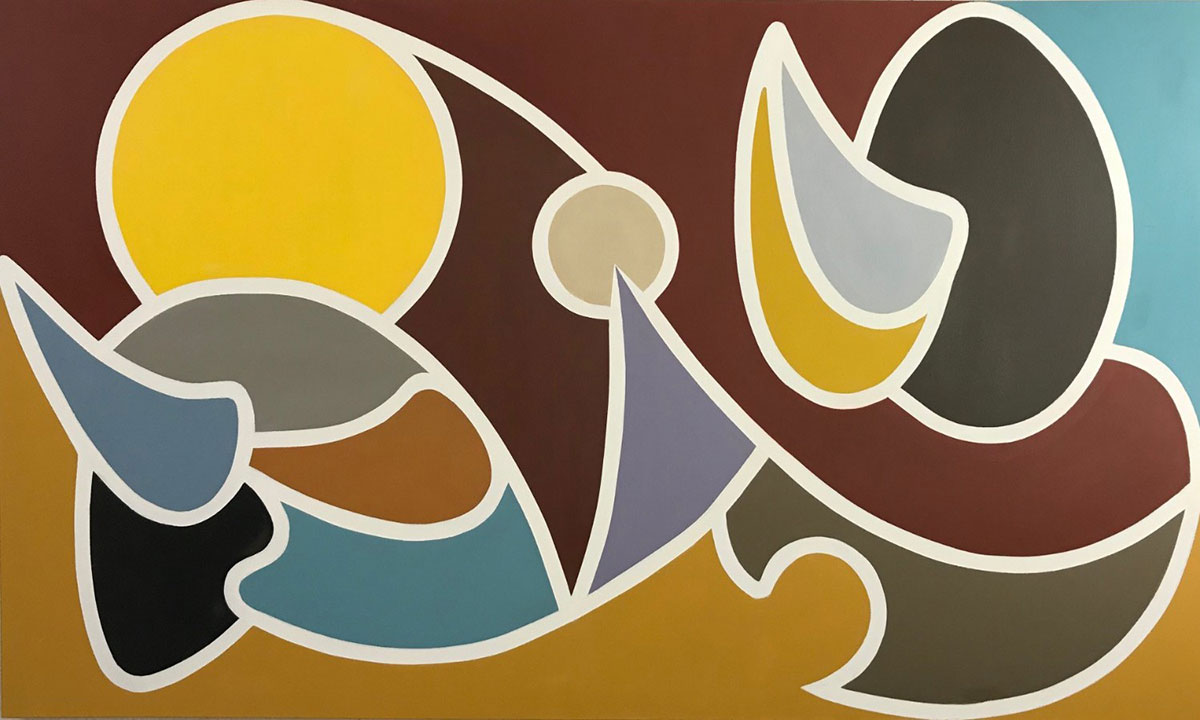 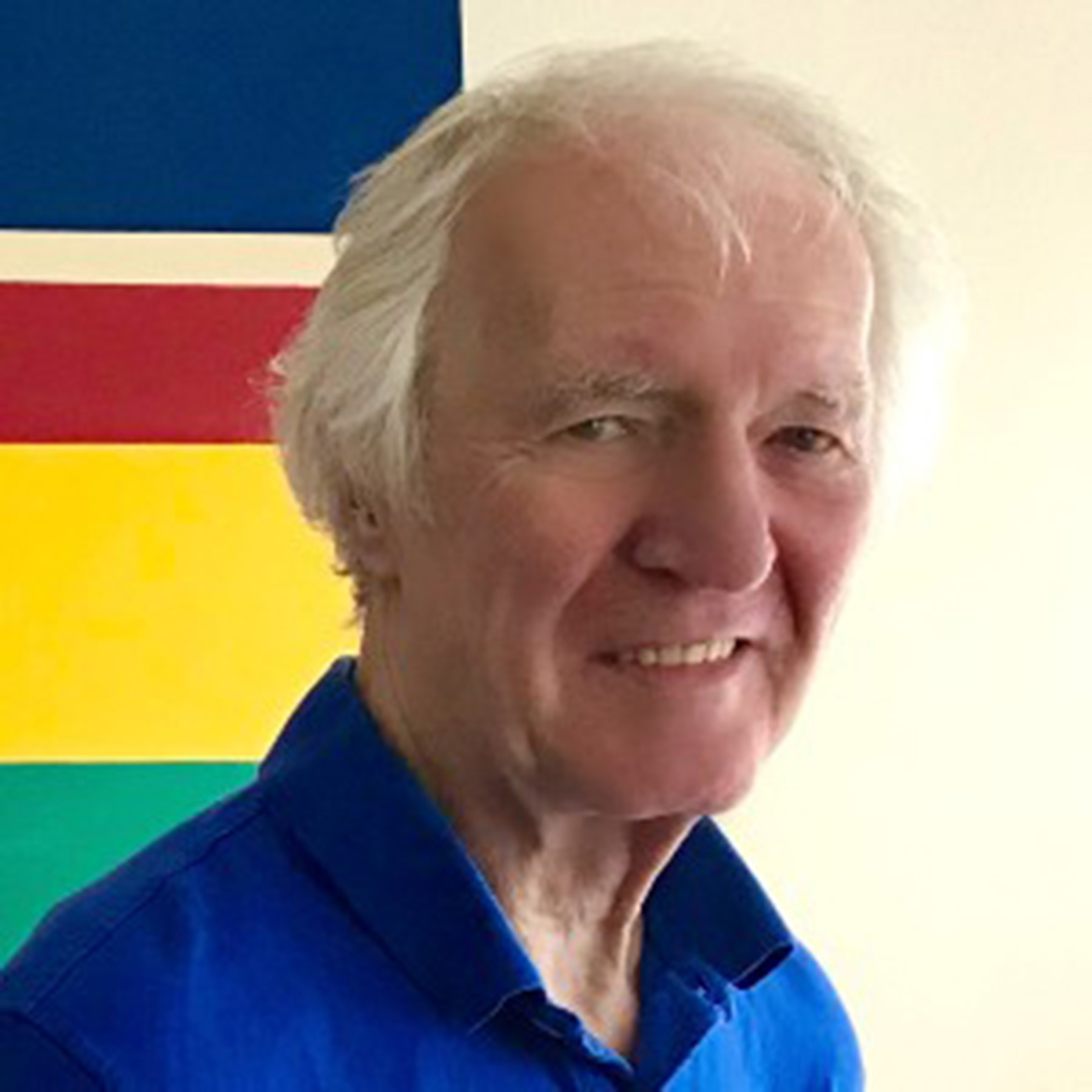 Erwin Meyer was born in the middle of World War II in Germany, which has always had a strong effect on his life, and is why he has spent most of his life creating extremely colorful and mesmerizing paintings. "The world is sad enough. I try to add a bit of color to people's sometimes somber existence!" In the 1950s and 1960s, he trained and worked in the Graphic Arts in Germany and Switzerland, and traveled throughout Europe, North Africa, and South America. In the mid-1970s, he studied art in London at the Sir John Cass School of Art and Chelsea College of Art. Later he and his wife moved to San Francisco, and in 1980, to New York City, where he was represented by several galleries. He was influenced by what he saw on his travels, his father's paintings, and the works of Picasso and Hockney. He has created an extraordinary collection of hard-edged geometric expressionist paintings exploring his obsession with color, shapes, harmony and rhythm. During his artistic career, his work has been purchased by individuals and collectors, commissioned by corporations, and exhibited in several cities, including in Austin, where he now lives.

My paintings are about harmonies of shapes and colors - from very small triangles to overpowering circles - all culminating in geometric fantasies. Often I create several consecutive canvases, as a necessary continuation of an image that just can't be stopped all of a sudden.

Practically none of these shapes are the result of conscious planning. At first, a line may extend from perhaps a triangle to a rectangle where it begins to form a different shape. From there I might extend lines in multiple directions, which turn into a myriad of shapes.

I would say I like to create a flash of sunshine on the wall that cheers people up a little. One can see different things in my paintings, and discover different compositions in various corners and sections that may not be apparent immediately.

In this series, the colors absolutely do not relate to anything in reality. Blue does not mean the sky, and red does not mean lipstick or love. Since I have traveled extensively throughout Europe, North Africa, and South America, sometimes regional colors have influenced me. My years in Germany, Geneva, Stockholm and London, where I studied at the Sir John Cass School of Art and Chelsea College of Art, and in San Francisco and New York City also greatly influenced my work. I have had many different experiences, and have learned to look at colors and shapes in many different ways. One needs a very great sense of color in order to be able to translate the variety of change into intriguing color compositions.

The color black is not necessarily one of negativity and depression, it can also be an element of emphasis, bringing out other shapes better if juxtaposed against them. I decided that it might be a cool idea to do something in black and white. This series created contrasts and challenges. I had to approach this whole process differently, taking care to create exciting dynamic tensions.

This series represents the colors that I repeatedly observed in various cities. I determined what the predominant colors of each city were, and then created stripes of pure color, in order to create a composition that could not be interpreted or misinterpreted in a different way. I didn't want to express anything else about each city.

In Saint Tropez and Nice, there was color, water and sand, in Berlin, reflections of light on glass and shades of gray, and for Venice, sometimes the colors in reality are not those I painted. They are what they once were, should have been, or should be, and now have faded. They are the colors of Venice in the past and in the present.

This is a composition of squares. I created a number of squares with each containing different geometric shapes that are complementary to each other. I only used three colors - gray, white, and black. The interrupted shapes have a certain impact upon the eye, focusing it at different times on different areas. One day, you think, "Oh, why is that like that?" and the next day, you pass by and see something else, and then maybe one day you'll see that there is a certain correlation between the shapes in the top left or bottom right, and so on. Every tile is different.

Instead of focusing on the shapes or the colors within the shapes, I created canvases with lines going in all directions. Being rather wide, these lines themselves create shapes, and their impact only becomes apparent afterwards. The shapes are harmonious, and the lines go over and underneath each other. It's quite an exciting ride for the eye. The square canvases often do not contain the lines; the lines end wherever they end.

I wanted to create a painting with absolutely no straight lines or angles. After completing the first canvas with curved adjacent color fields, I decided to paint the second one with white lines separating the colors to emphasize the beauty of the shapes and to increase the flow and rhythm. For the third canvas, I painted the same lines, but changed what would have been the white lines to black and omitted any color in favor of a white field. I wanted to explore the difference in feeling. The last two canvases are my experiments with blue and brown color palettes, but still separating them with white lines. 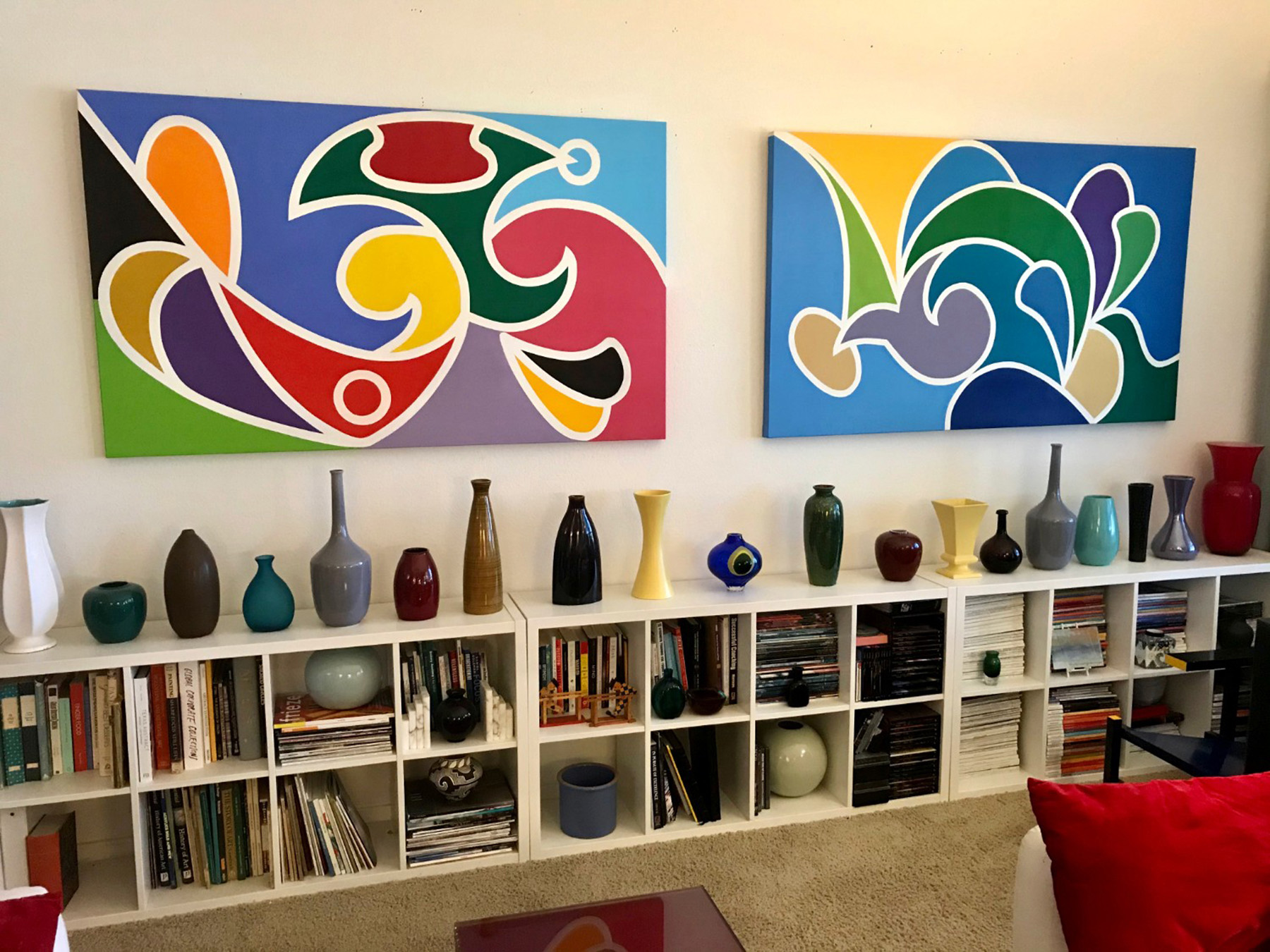 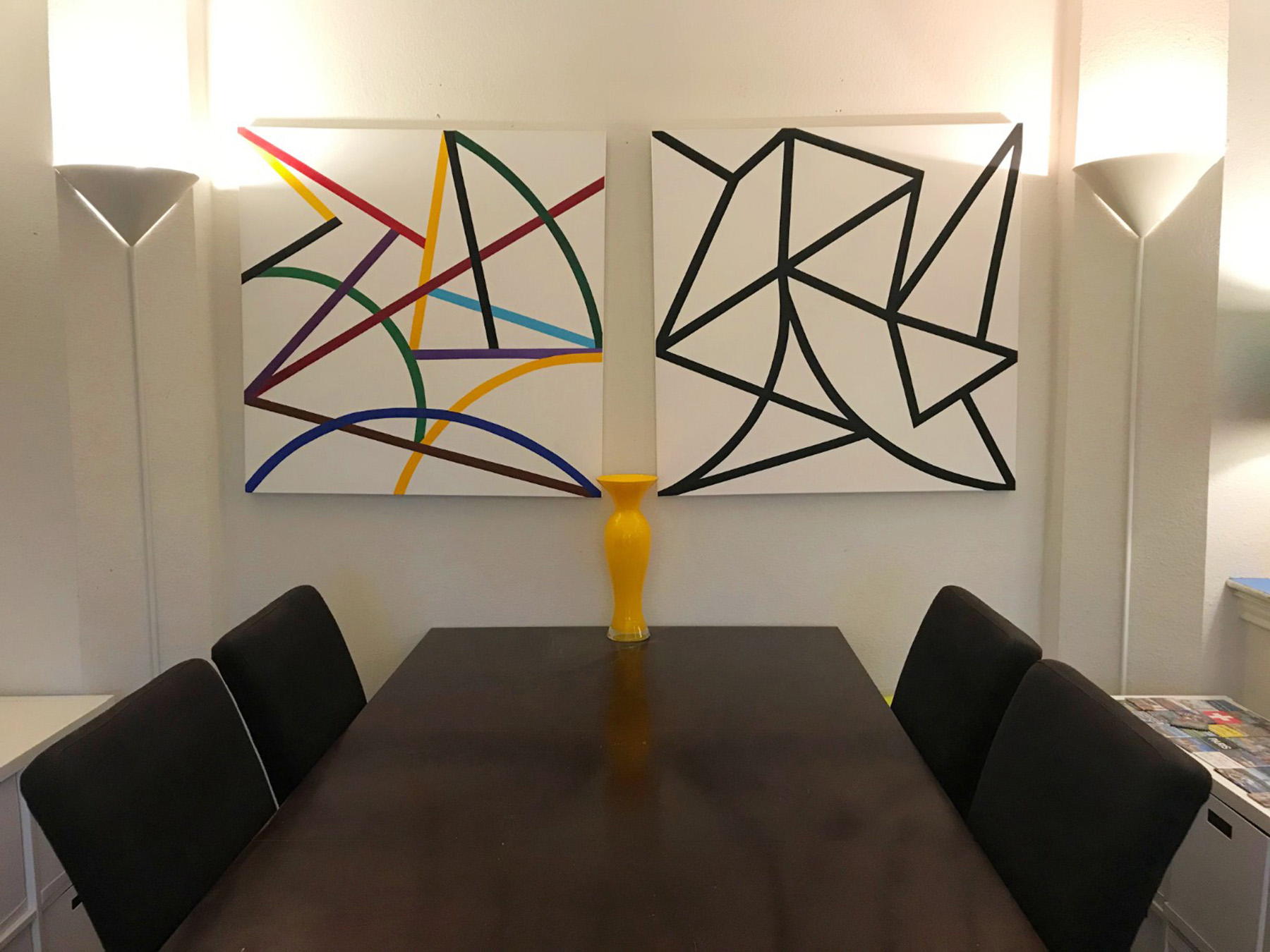 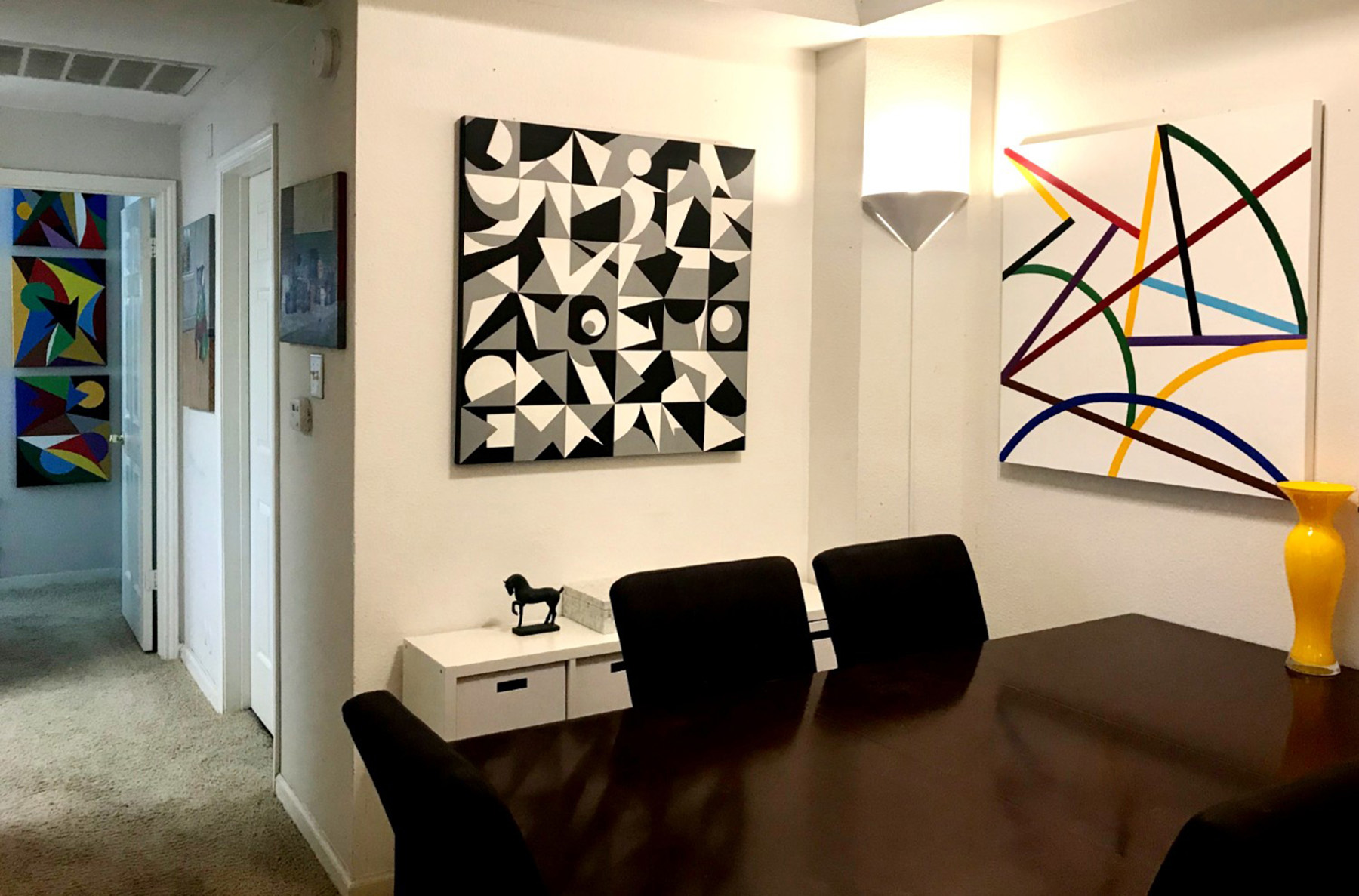 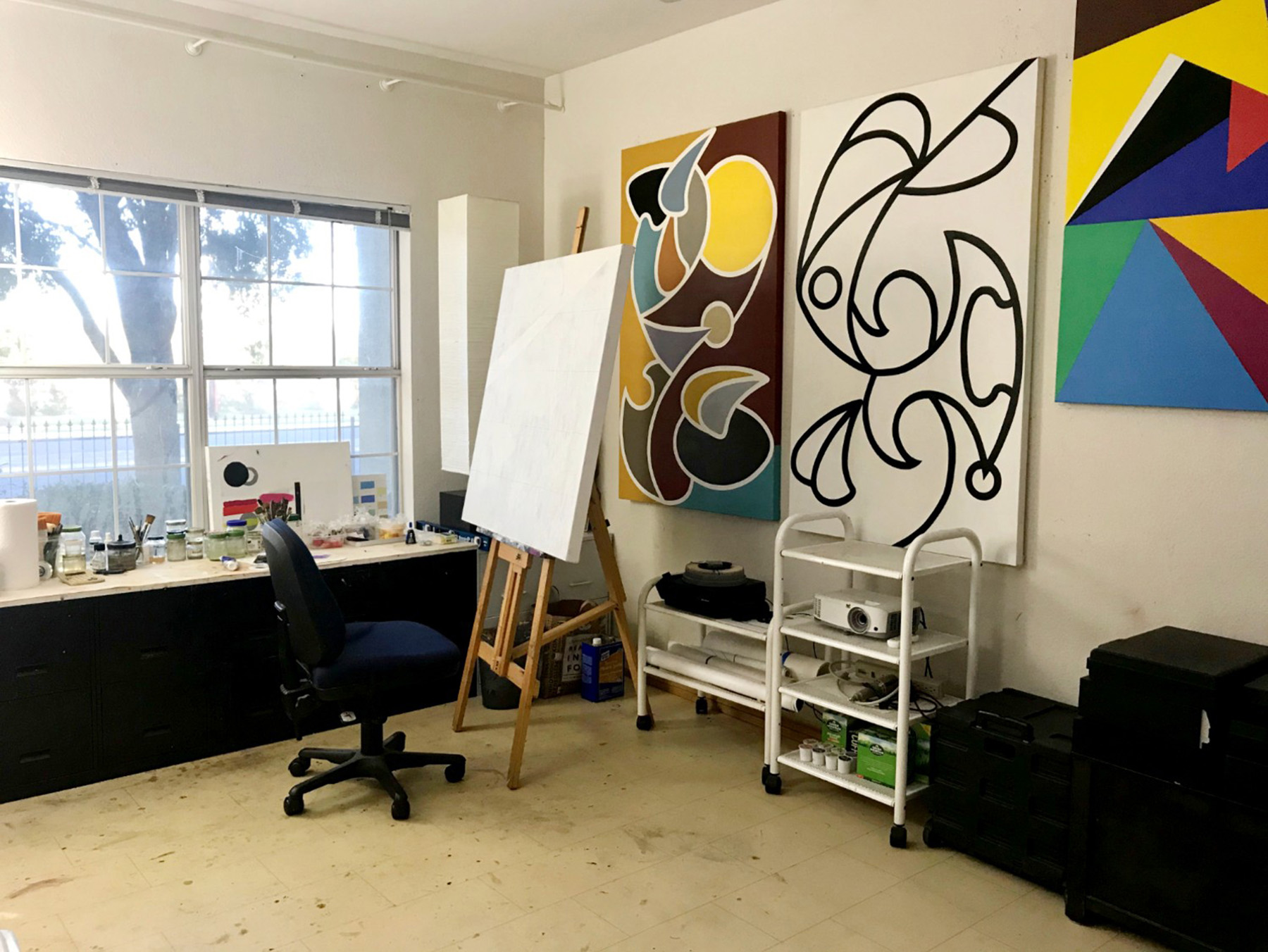 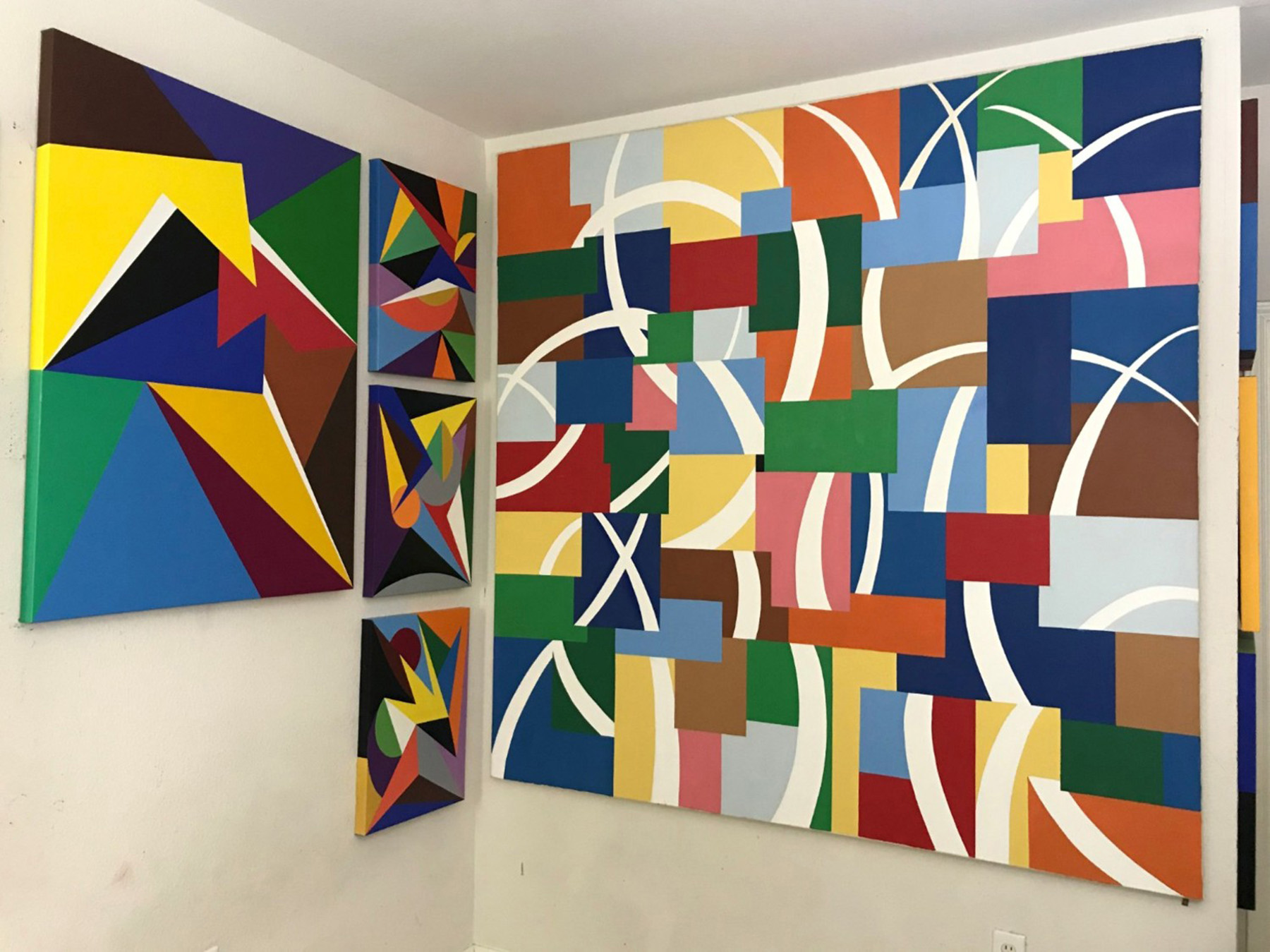 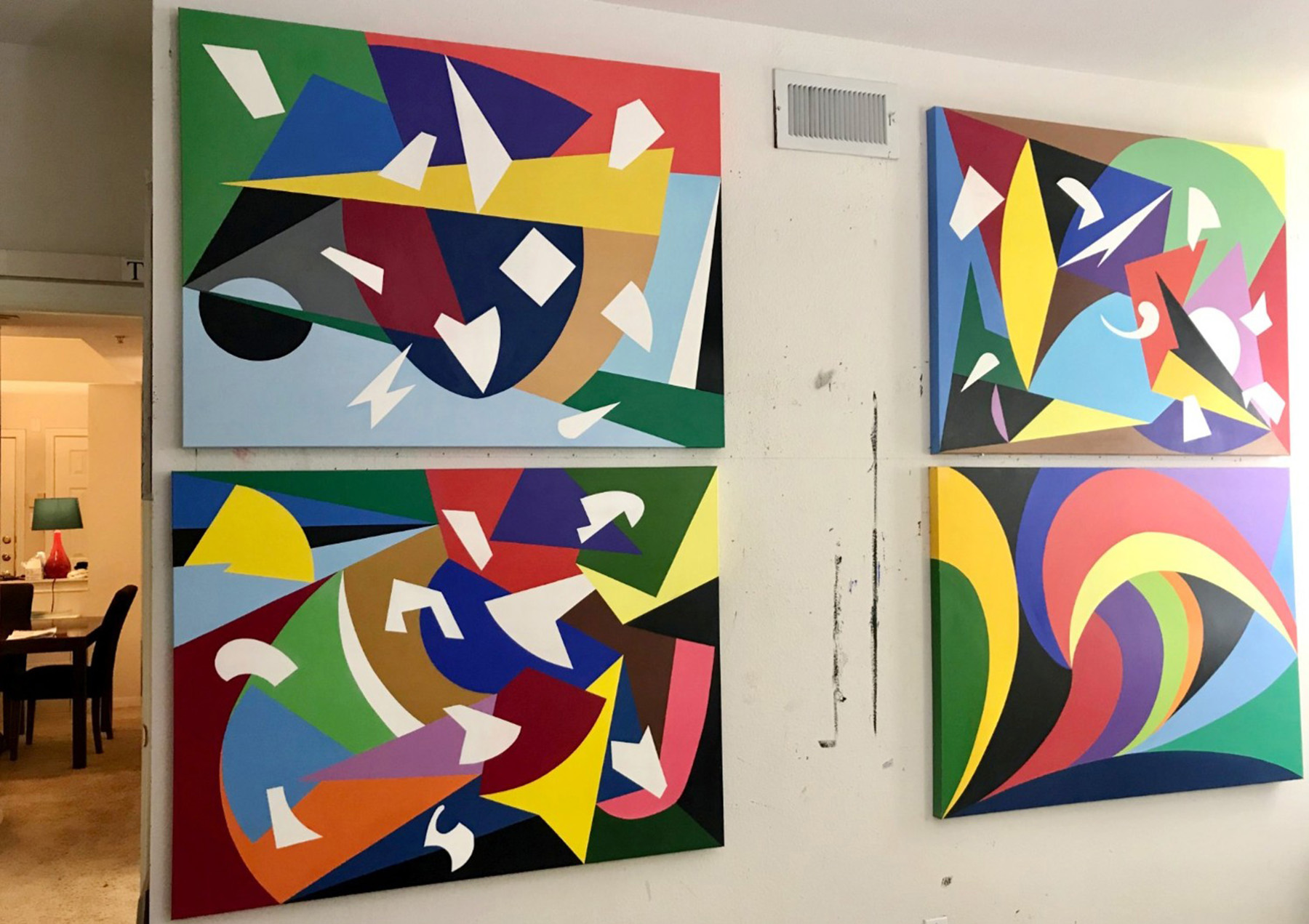