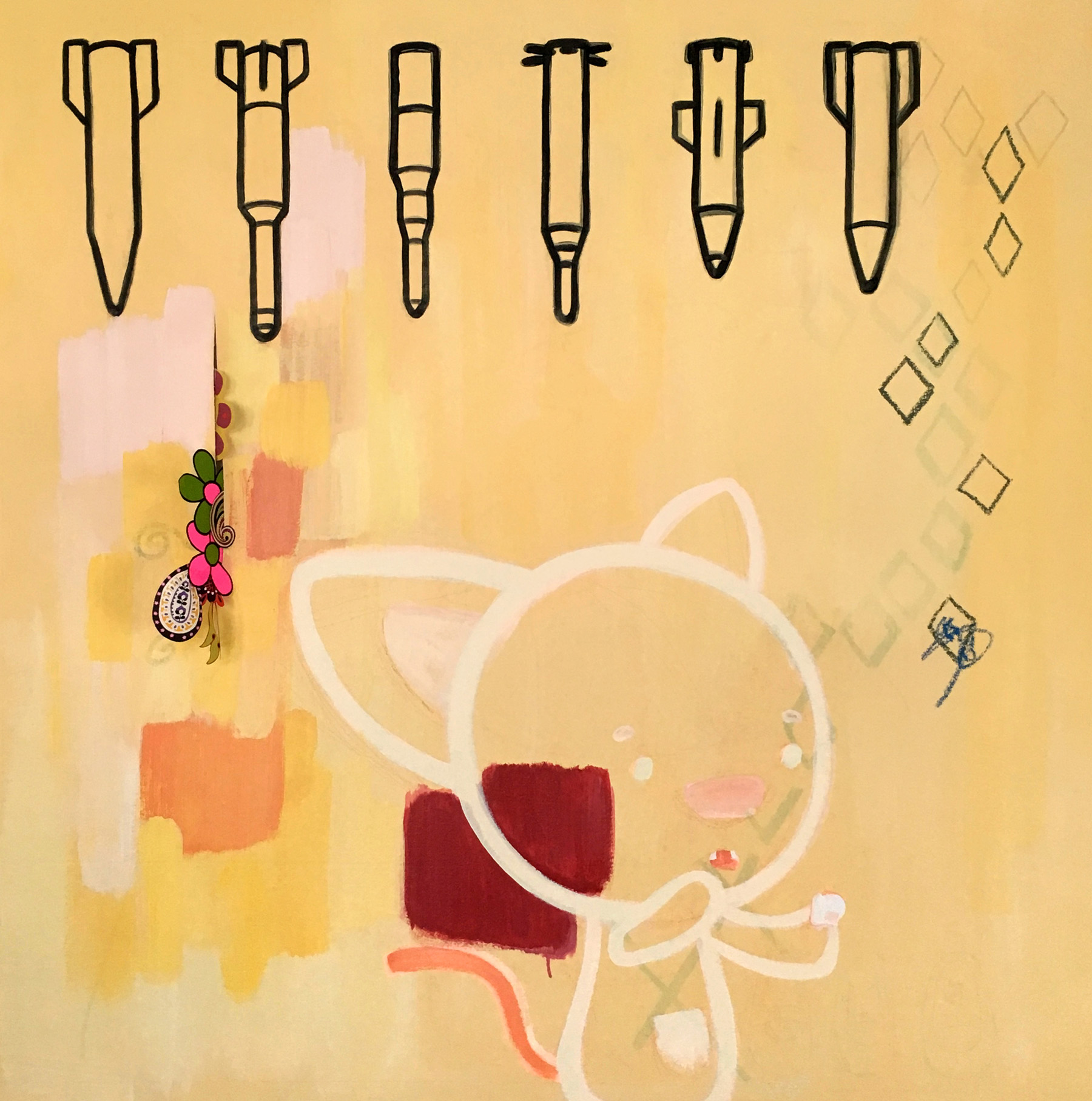 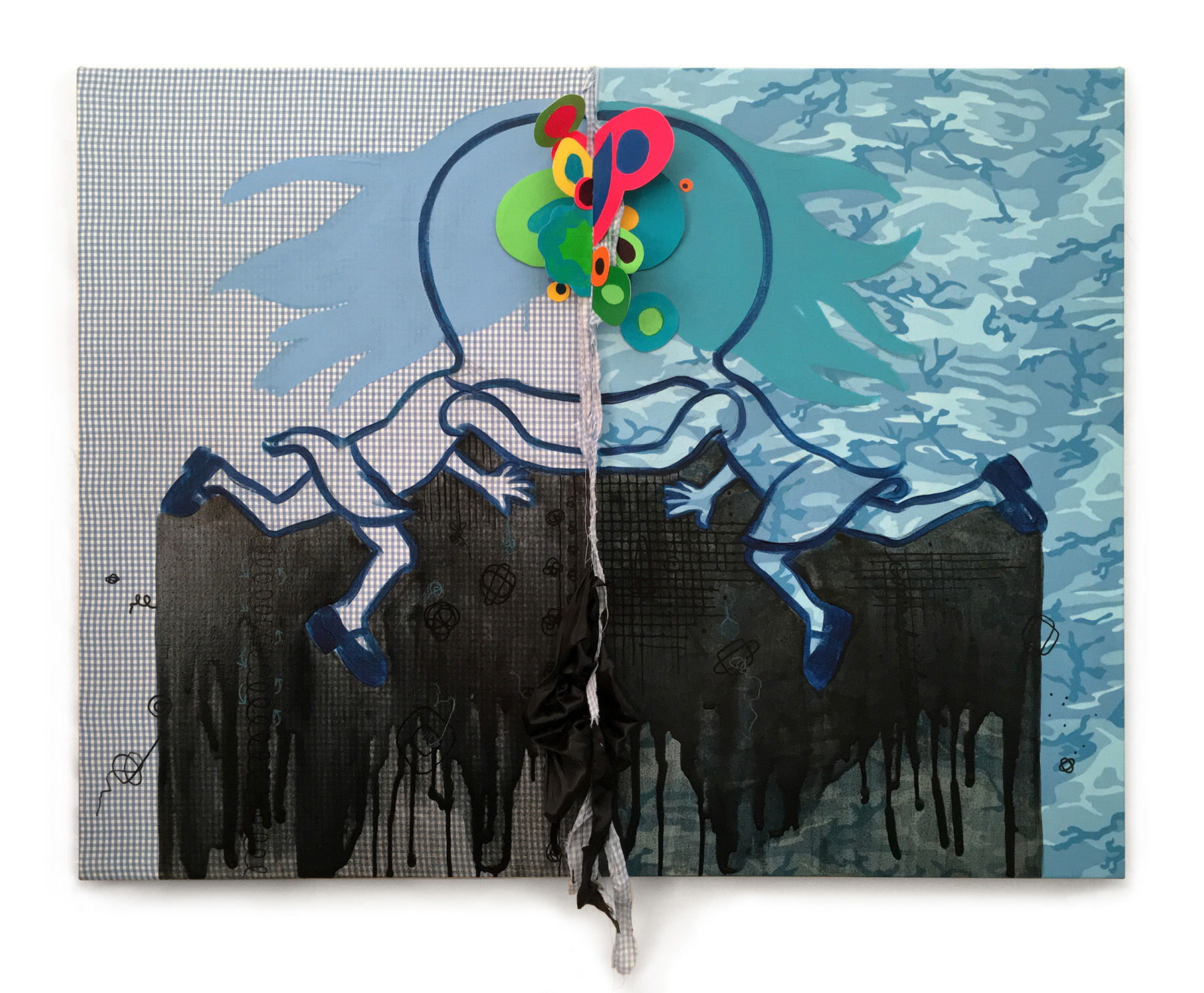 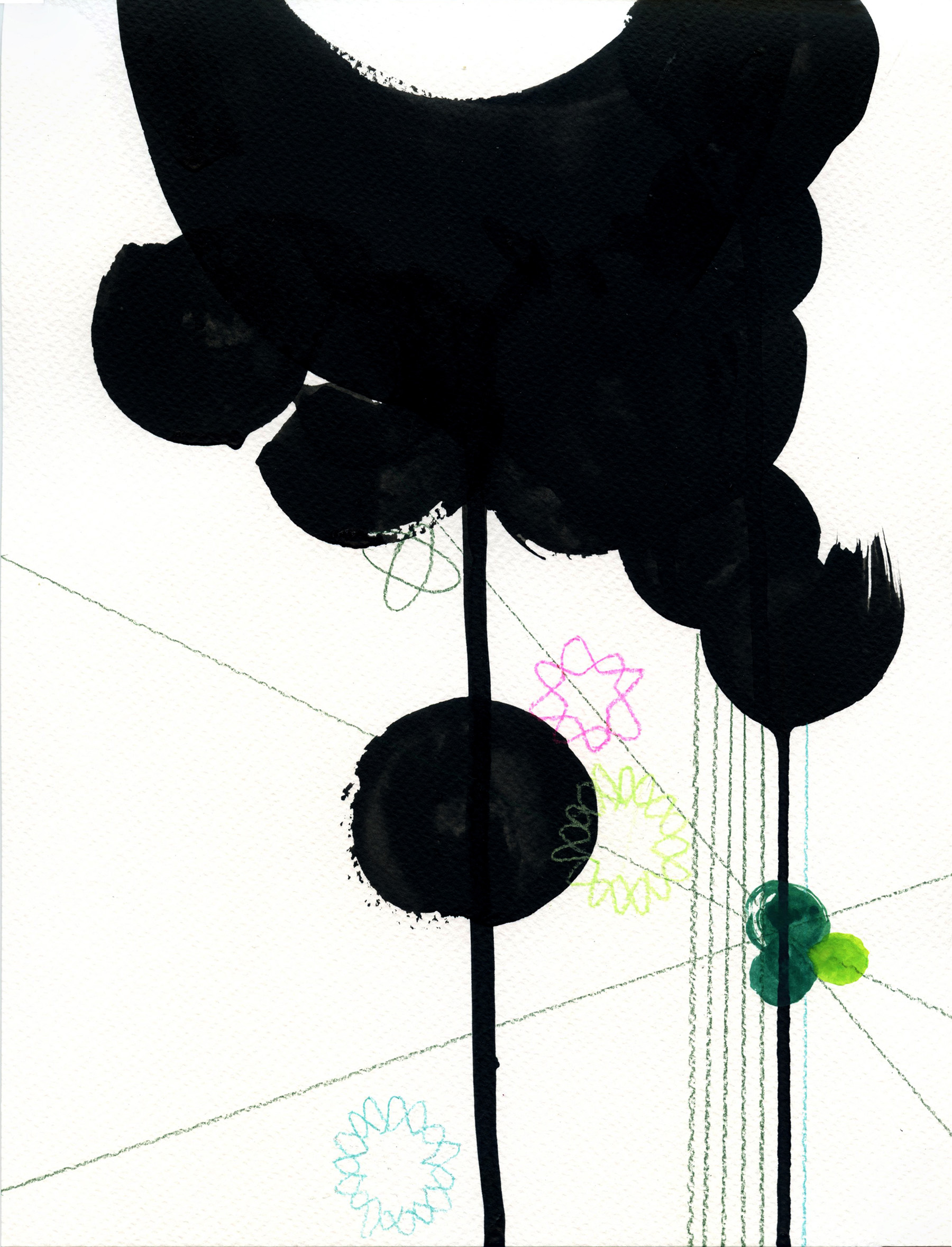 Disharmony of the Spheres: Strings 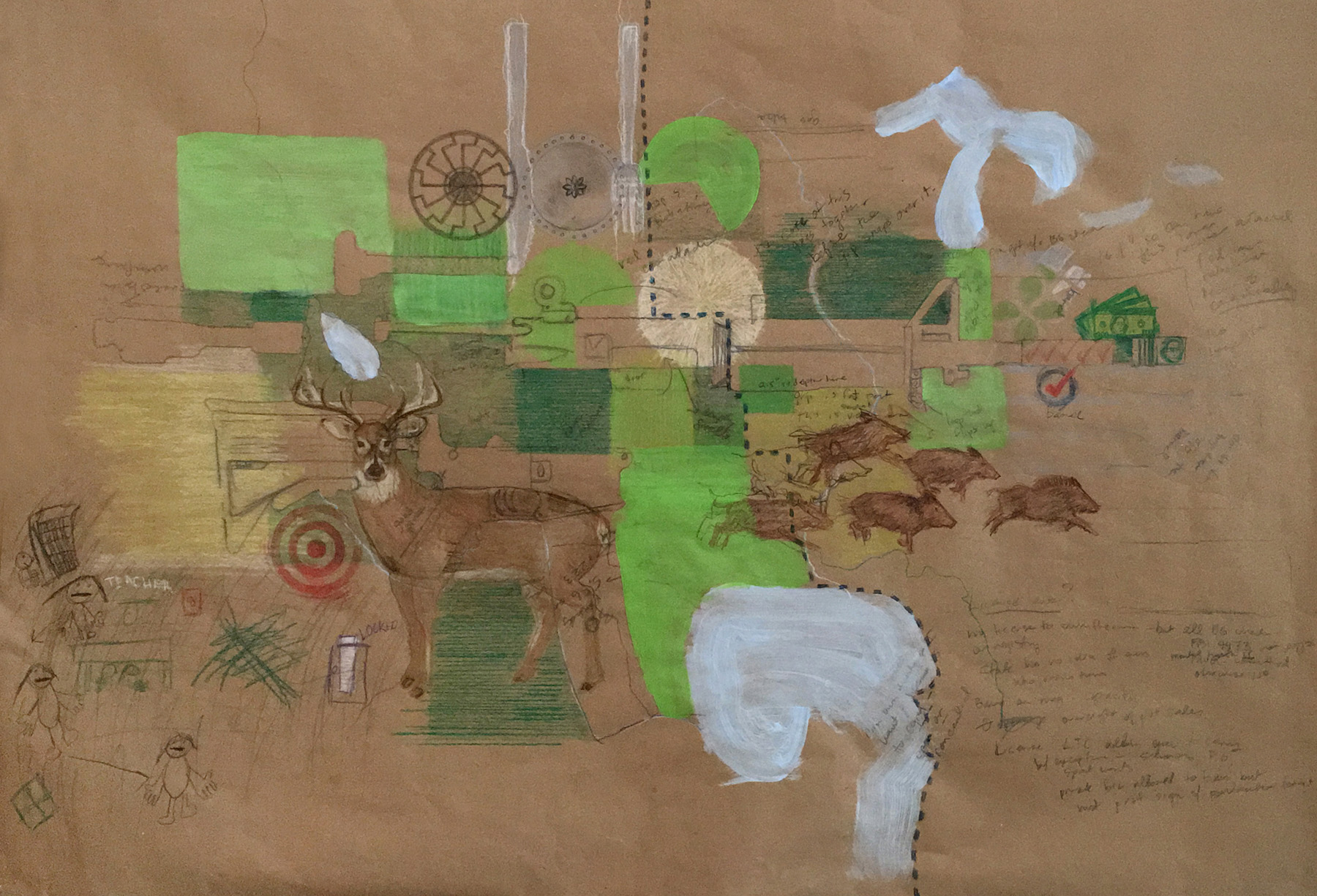 And to the Republic for Which it Stands 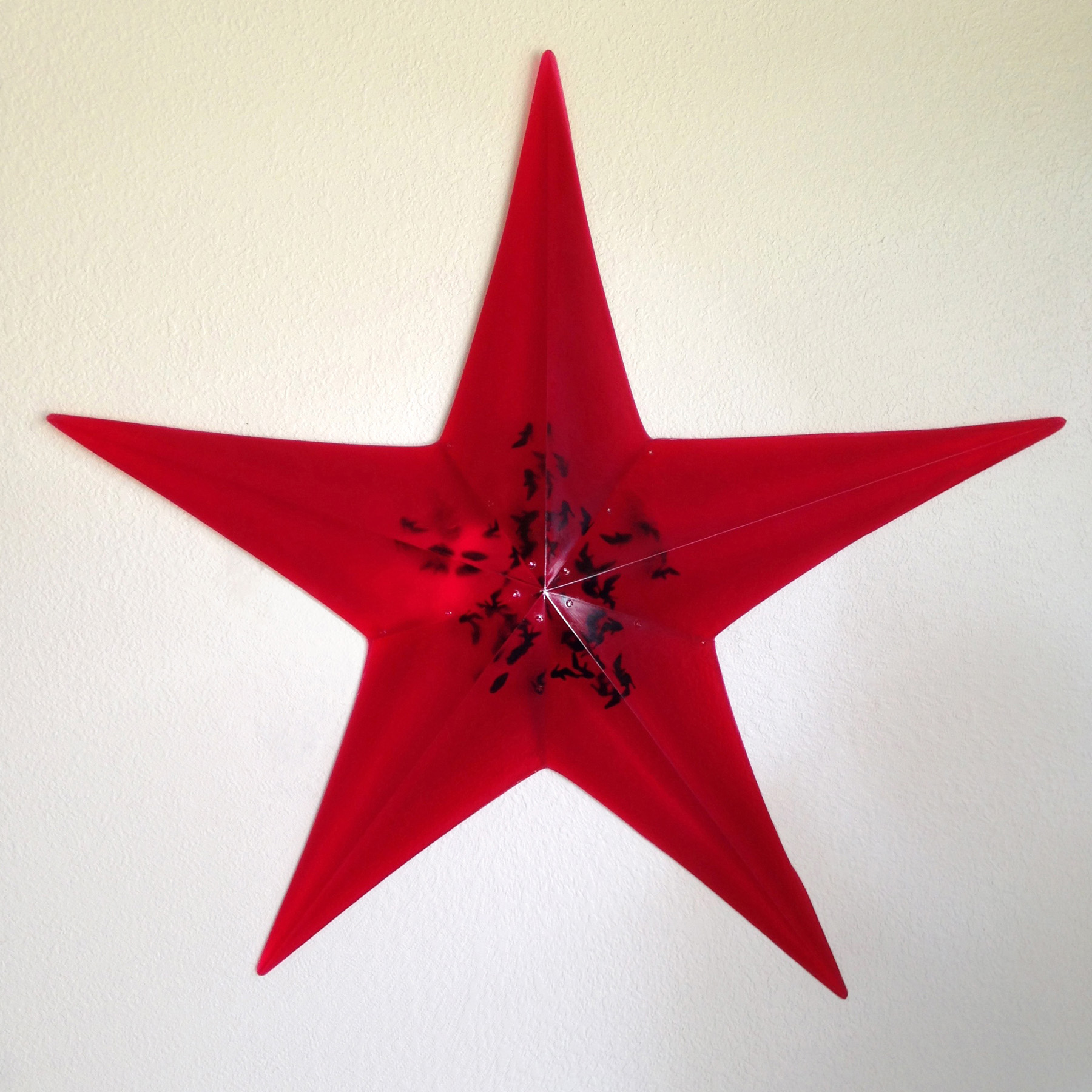 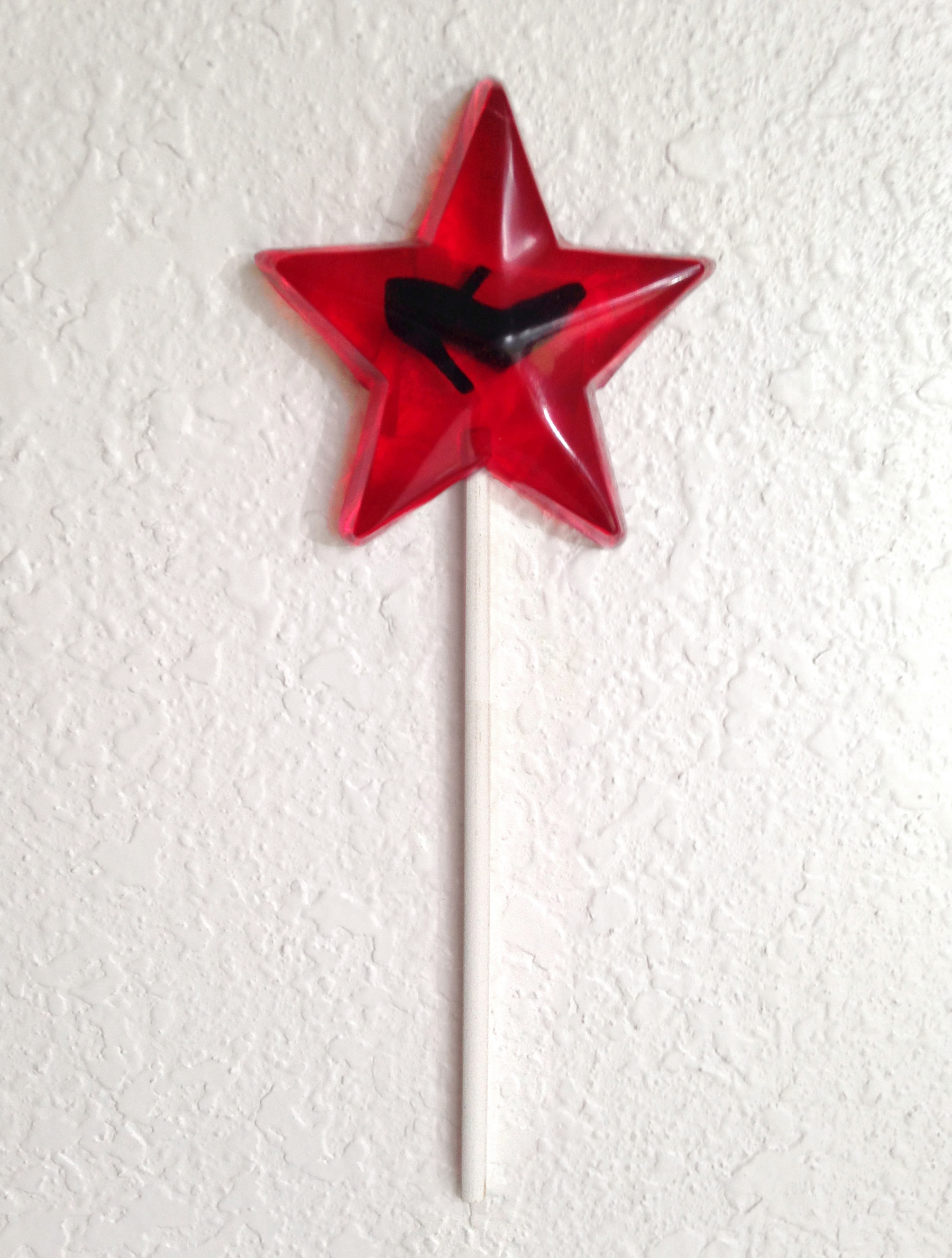 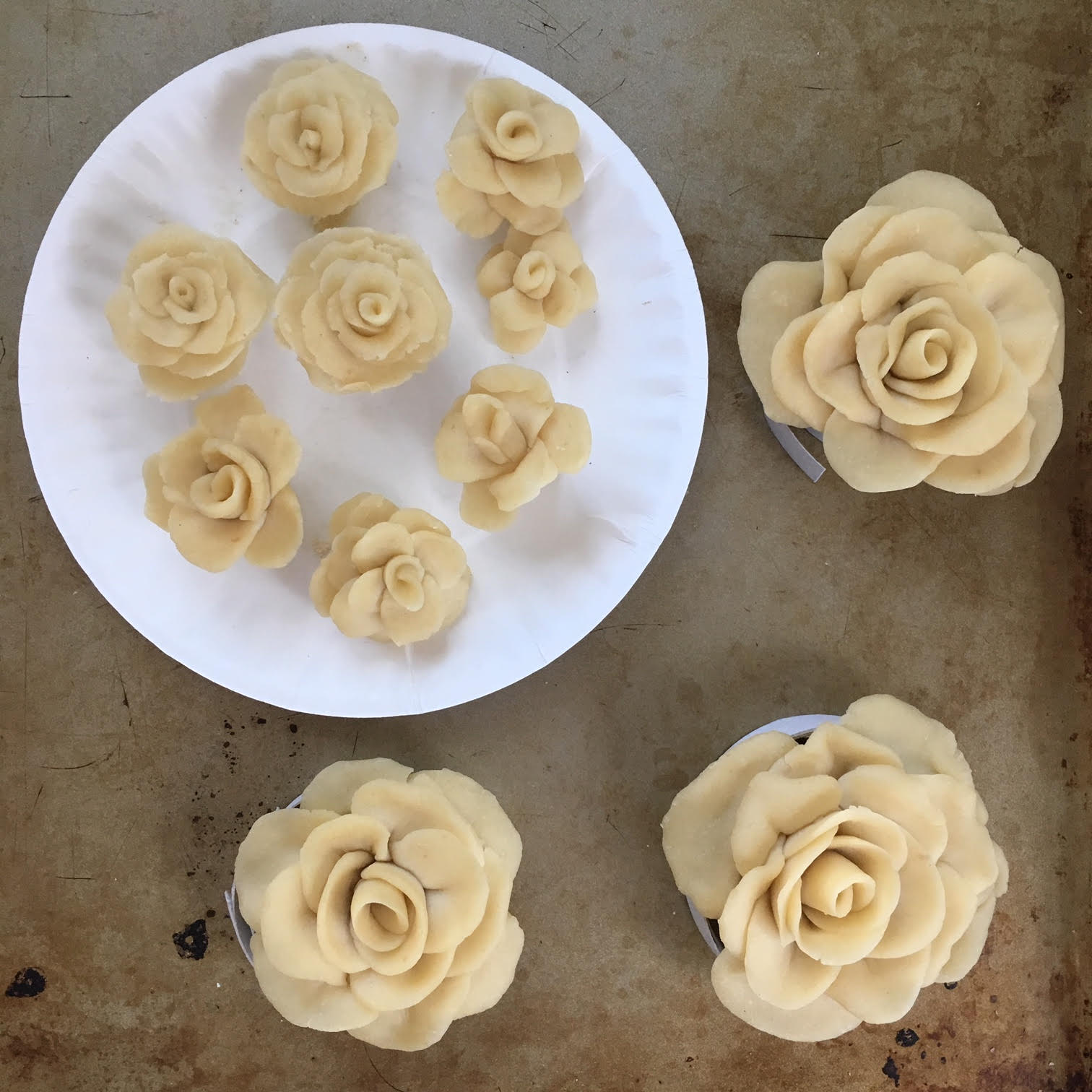 Lalena Fisher shows her studio and discusses the thought processes and methods behind her painting, sculpture, installation, and music projects. 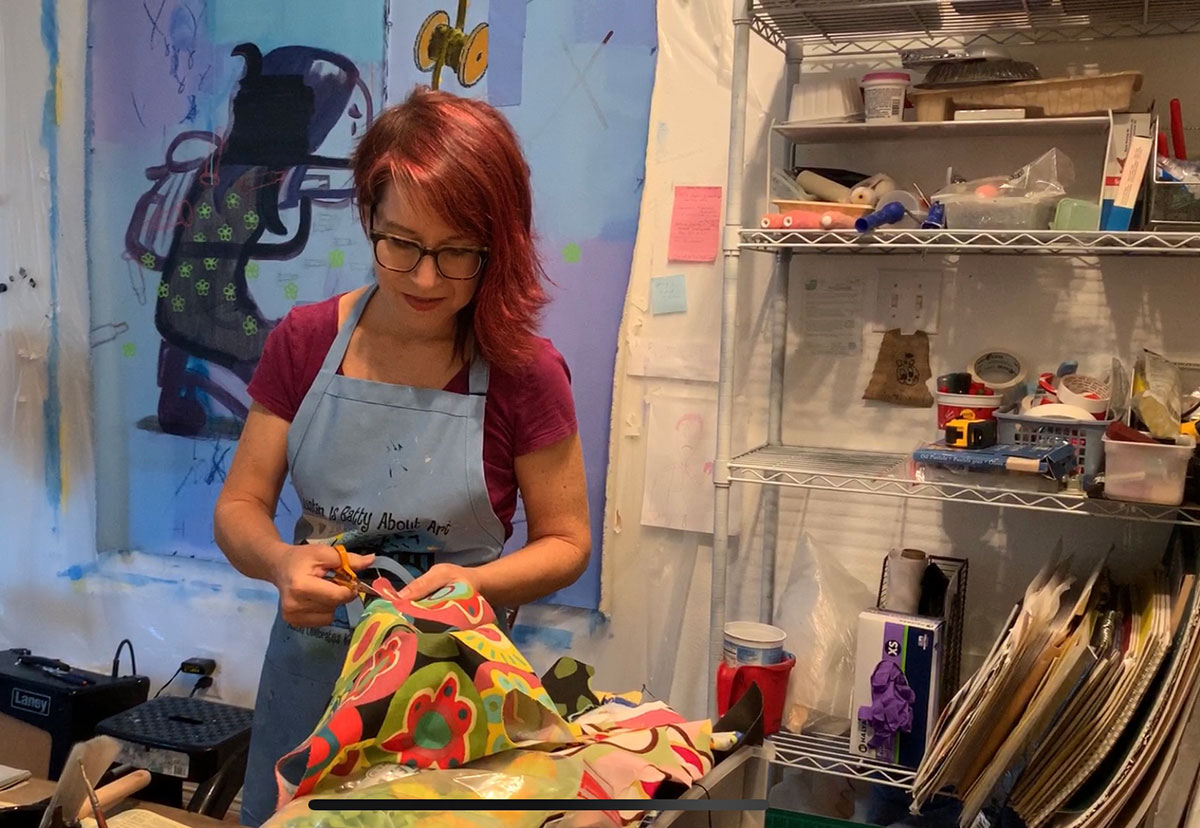 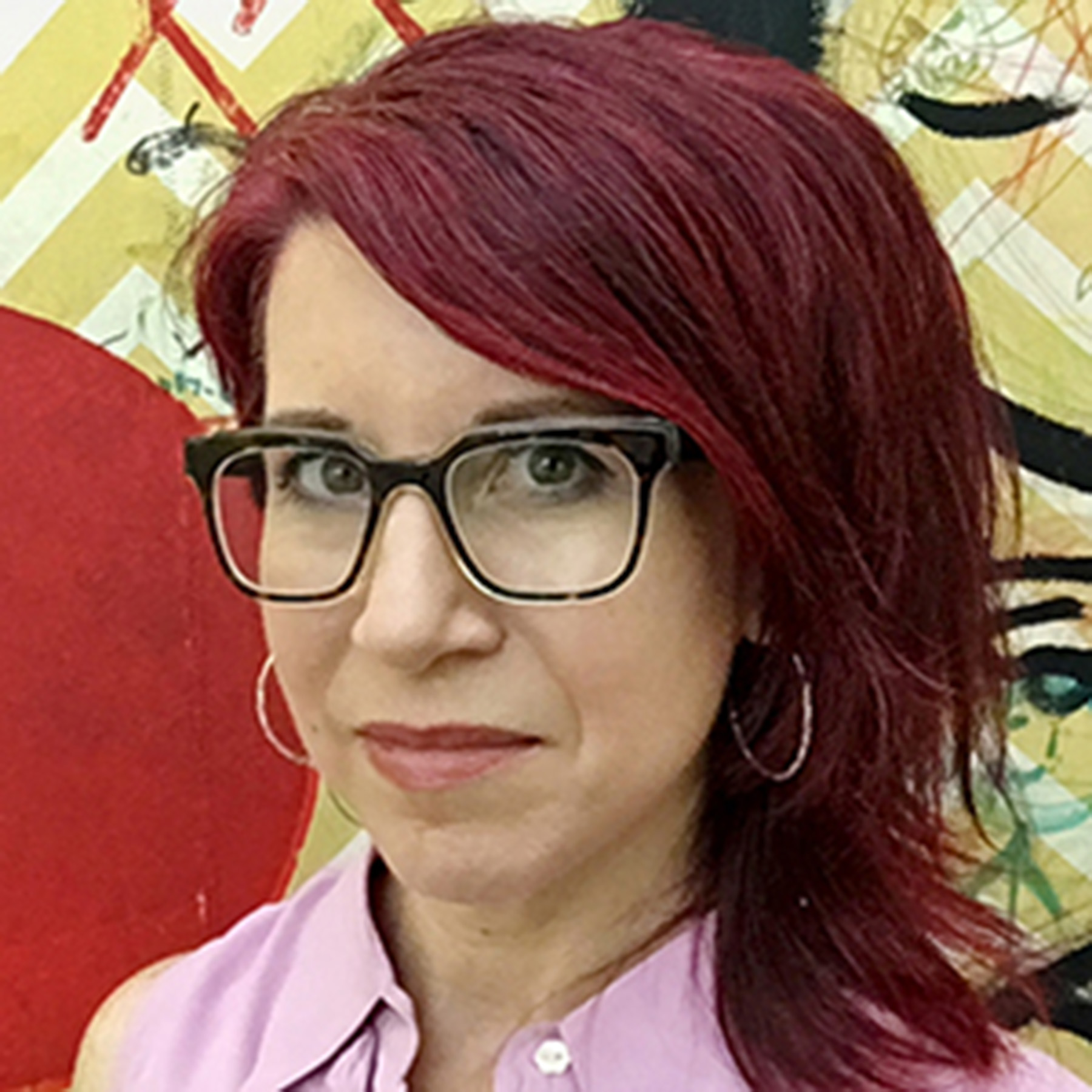 Native Houstonian Lalena Fisher earned her MFA in painting/new forms at Pratt Institute in New York City while assisting artist Matthew Barney in his studio. Fisher later designed characters and environments for the kids' TV shows Blue's Clues and The Wonder Pets, and served as an information-graphics editor at The New York Times, while writing and performing music locally and regionally as leader of the band The Color Guard. Back in Texas since 2009, Fisher makes sculpture and painting; she also provides graphic design for a variety of clients and creates illustration for children's publishing; and writes and performs music with her daughter as The Mothermold.

My bold colors and iconic forms in paint, fabrics, plastics, music, and even bread, showcase the aggression in the seemingly benign.

Being a female, urban, native Texan places me perpetually on guard. In my car at traffic lights I find myself idling behind regional stereotypes - "Come and Take It" bumper stickers and all. Yet I feel I embody the essence of the Texas spirit: brazen individuality, flamboyance, and strong-mindedness. These have never been the sole domain of the rural, straight, white man. He's just had a heavier fist.

My resin sculpture Suspended crystallizes this, entrapping 39 miniature women's Mary Jane shoes in a Lone Star. The number comes from data on maternity-related deaths in Texas. Health care laws have been written by a state body that is less than a quarter female. So the piece also speaks to the larger phenomenon of women being encased silently in an outsize legend that professes to speak for everyone.

During the first week of the most recent Legislative session in 2019, I interrupted the flow of foot traffic in the Texas Capitol with a massive grid of paper Mary Jane shoes aimed at a disassembled assault rifle. Assemble to Disassemble interjected the presence of underrepresented Texans - at a scale and in a location that lawmakers could not ignore. The work represented young activists who had called for stronger gun legislation. Between the gun pieces blossomed white flowers made of migajon - a homemade craft dough used by Mexican women to create heirlooms for their daughters - to evoke a new generation of Texas leaders. A community of friends and kids helped fabricate the shoes and the flowers.

I remain enchanted by the transformation of household materials like white bread and glue into beautiful and lasting expressions of love for daughters. So I used the material to make a set of bullets and called it Ammunition as a metaphor for the weapons of love and support with which we arm kids to withstand myriad assaults on self-worth and dreams.

The ammunition I am giving my own daughter takes the form of a music project: The Mothermold, named for a sculptural mold's outer supportive shell. Together we experiment with superimposing a mother-daughter bond on the stereotypically male "rock band" trope. Our songs fuse metal, punk, prog and pop, musing on space, genetics, bad hotels, heroines, and growing up; some are geared to adults, others more kid-driven. This project is embedded in my artistic interests, so I present it as part of my body of work.

Meanwhile, in my paintings, child characters move in acrylic over nostalgic fabric patterns and tangled stitching, mashing up abstract expressionism, my animation background, and my grandmother's quilts. Tapping into the psychology of transitions, I poke at the line between order and disorder, before and after, inner and outer worlds, feminine and masculine, childlike and mature. I strive to reveal the toughness in childhood, because puberty for a girl is a time of both vulnerability and rage.

In all these ways, I prod at dividing lines to push the inherent characteristics of a familiar material or form until it nearly morphs into another state. Engaging in a struggle to impose order on disparate raw elements, using assertive paint marks, forceful needle piercings, powerful cultural symbols and vivid colors...I accept and respect that chaos has a bossy beauty of its own. 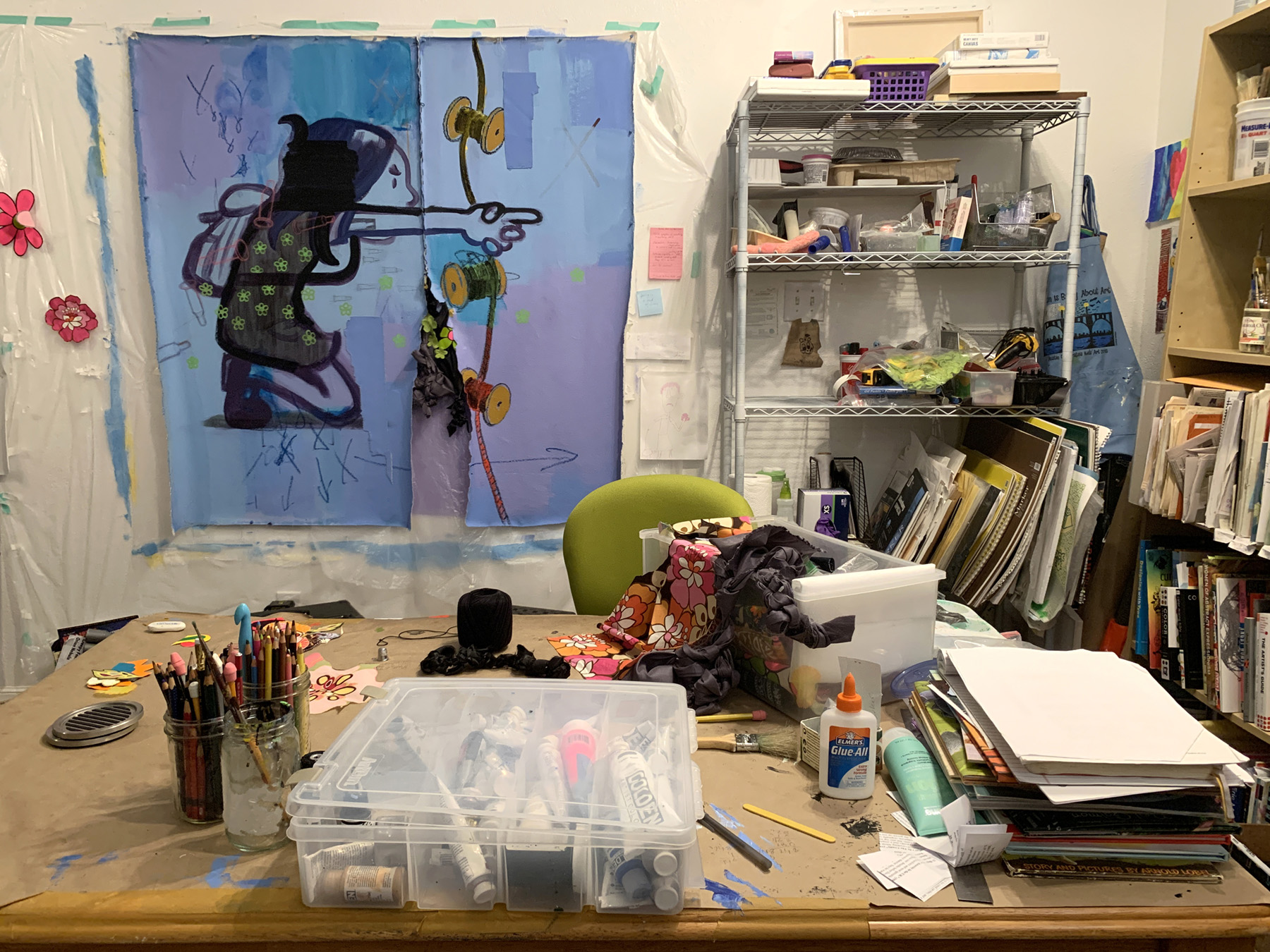 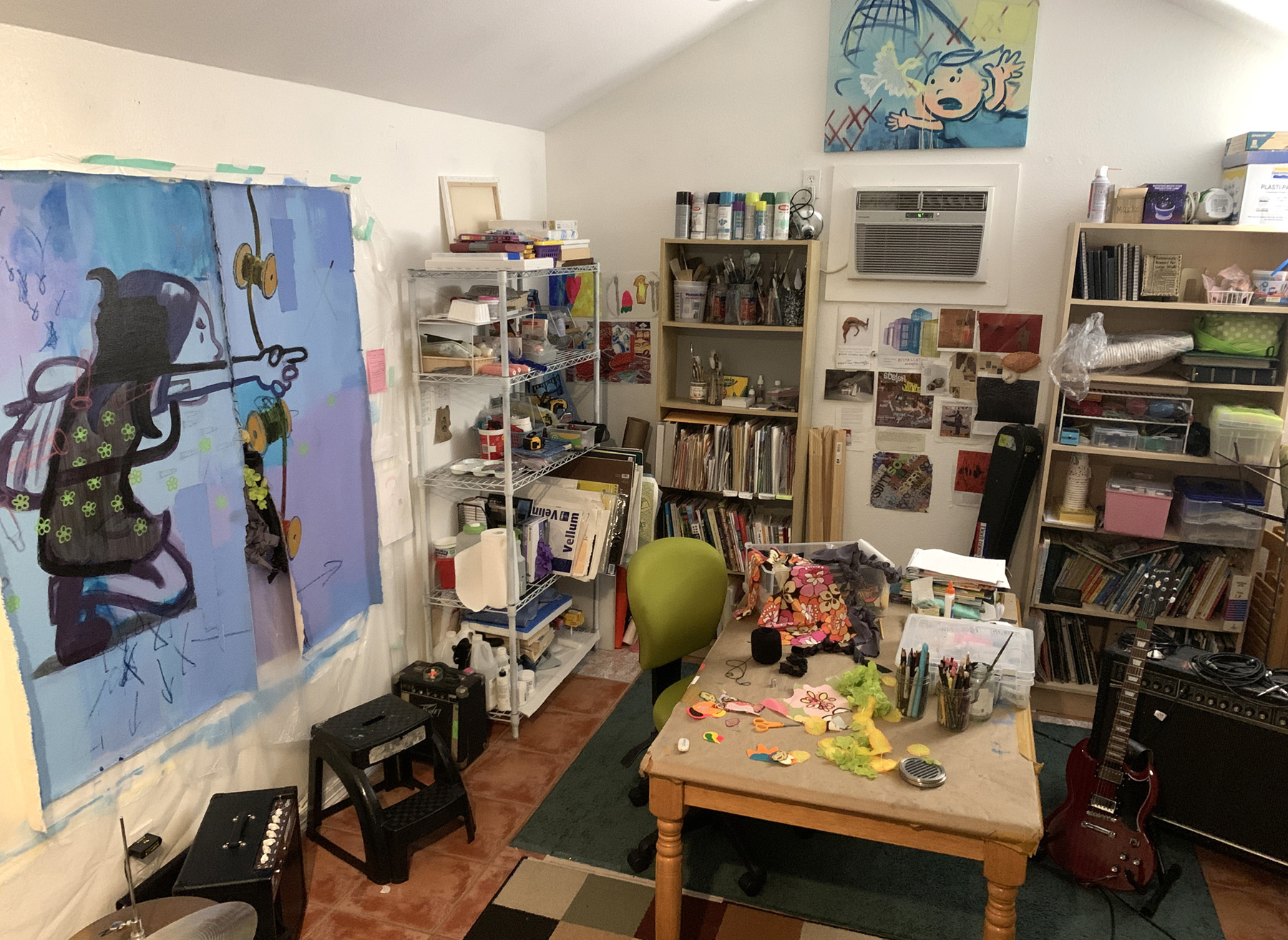 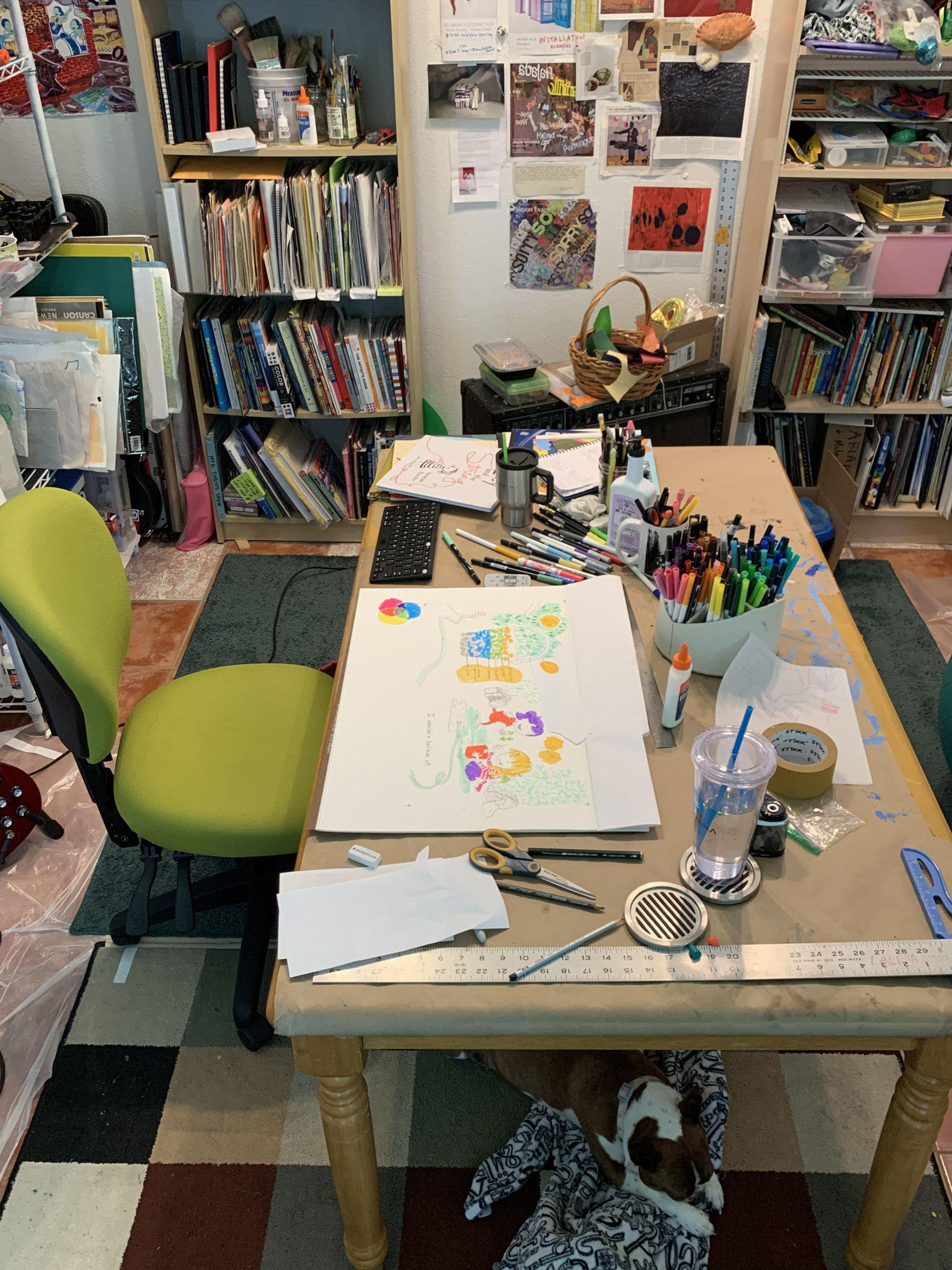 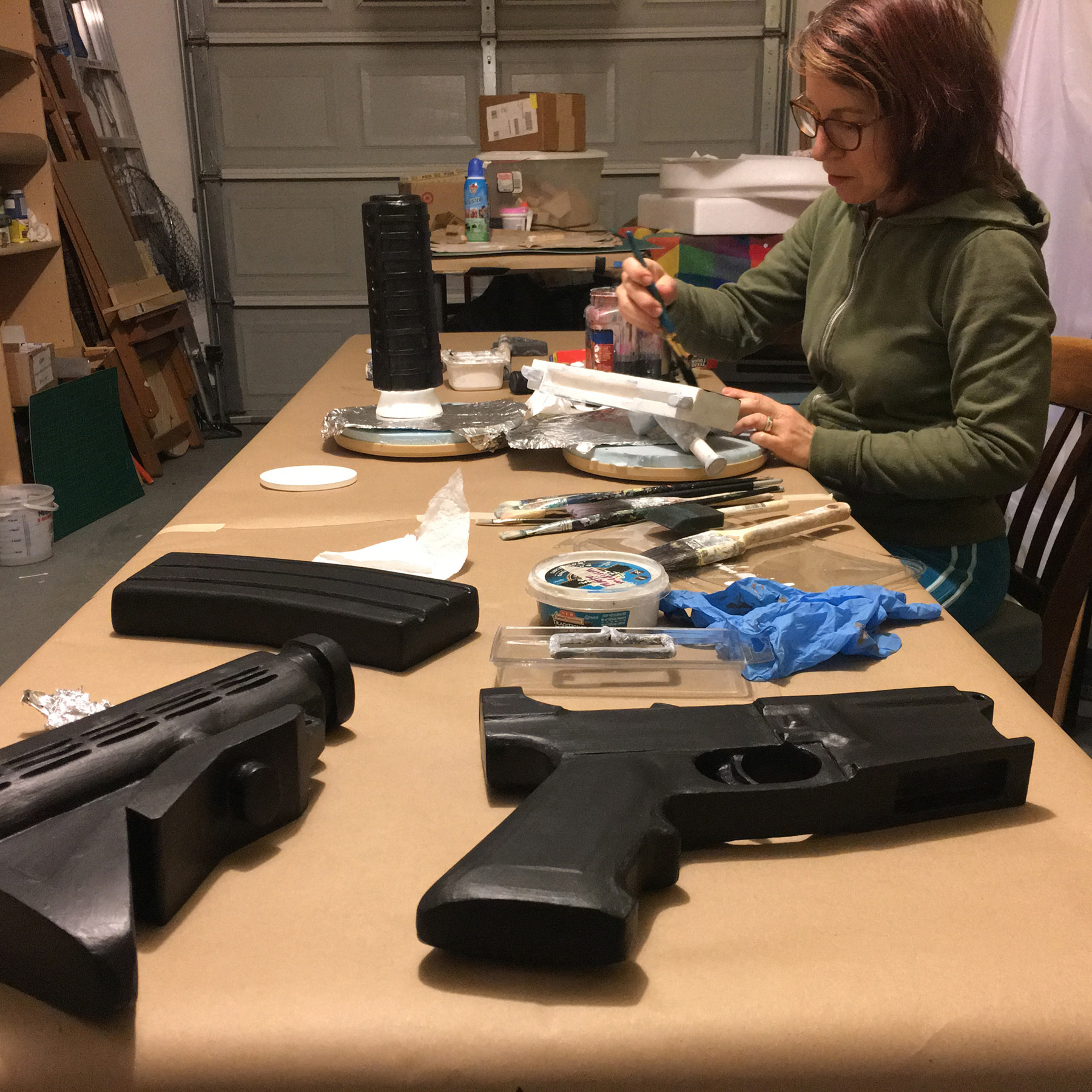 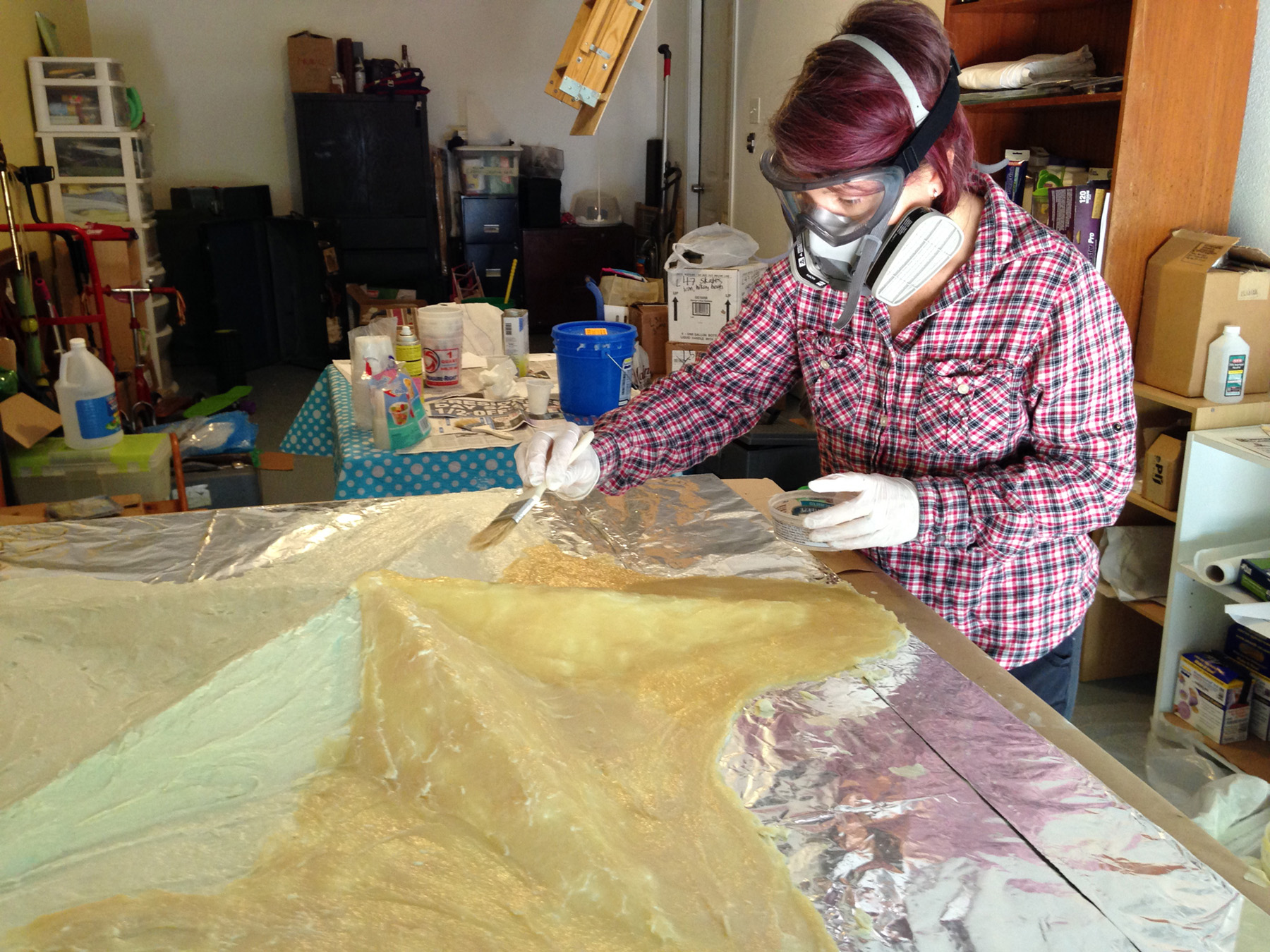 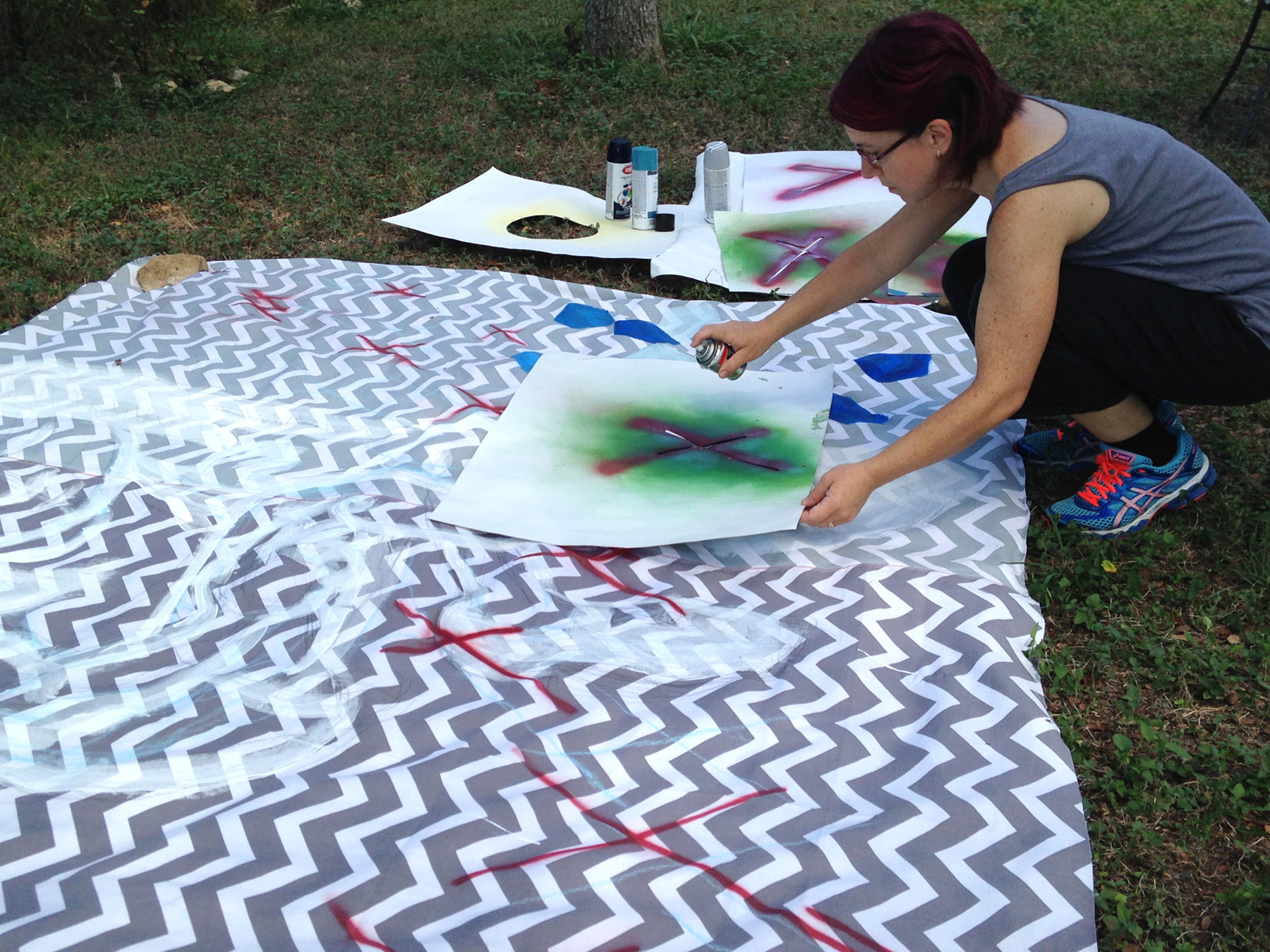